The Methodical Structure of the Encyclopedia

The author has observed certain methodical principles which he believes must be adhered to for any desired achievement connected to any work and epically to his work on this Encyclopedia. These could be summed up as follows:

1. In the first instant he believes in the encyclopedic work. Earlier on he planned and commenced working on a comprehensive linguistic encyclopedia to deal with the roots and define metaphors and their uses. He supposed that a work was originally meant to denote one single sense. He also made efforts to derive single words from the womb of the language through declensions from new subjects and their respective words which entered our daily life.

He also planned for an encyclopedia on history, and in collaboration with some of his students in Iraq he made its necessary elements available, however, security conditions stood in the way of finishing this work. 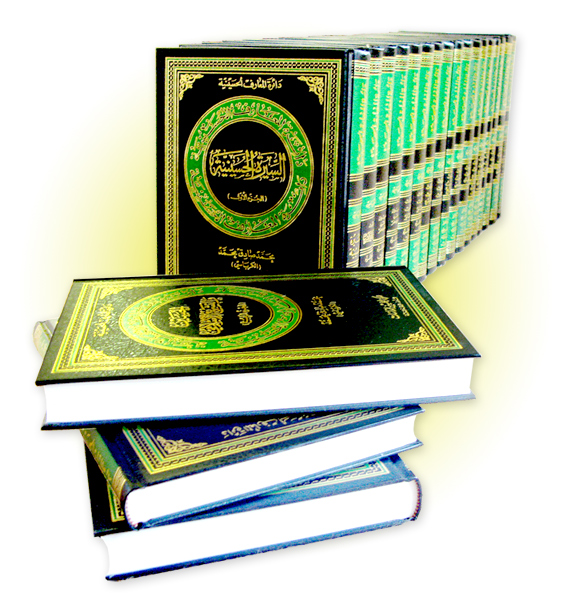 In Beirut, he thought out of a plan to work towards an encyclopedic commentary of the Koraan to cover all aspects of the verse of a subject of the commentary, even those which relate to the characters and sounds, besides al aspects of Koraanic knowledge with reference to all commentary made on the subjects and discussion them from all their philosophic, linguistic, jurisprudential, rhetorical and sound aspects. However he could complete only one volume. No sooner had he completed this volume the civil war commenced and intensified in The Lebanon.

Early on, the author put efforts in planning to collect all that concerns the subject of Religion and the words of prophets and imams in one single word to rightly bear the title of hyper-encyclopedia with authentication of resource and text (of narration), then to classify its contents according to modern methods. He was unable to fulfil this job, despite the fact that he attempted the collaboration with some twenty of his apprentices whom he trained on methods of verification, and he made available the necessary reference books for that job. Eventually he had to leave Beirut to another place for an unknown period.

All materials are headed, numbered and marked which could assist the task of the reader, researcher and critic.

For avoiding ambiguity, al texts are marked by phonetic signs when necessary.

He believes that quantity and quality are sources of power and both to be used, provided that neither should be favoured at the expense of the other. Hence, he did not fix a ceiling for the Encyclopedia in term of numbers; however, he did not set free the reins to them without due to examination and analysis.

Also, regardless of some of the moral motive behind the idea of the Encyclopedia, which he has explained in the first volume, he wished to introduce something fresh about Imam Al-Hussain (PBUH). He vowed to God on that. Hence, he thought of brushing up the truth of greatness of the Prince of Martyrs which had shrunk, or rather made to shrink, on an account of certain schemes to take the Cause of Al-Hussain and his reestablishment from al spheres of recent history. The author has therefore embarked on a process of a gigantic educational explosion of endless waves.

He knew that that explosion would take place; the two elements of quantity and quality were both therefore needed. He has consequently applied them both in a subtle equation, which gave birth to this Encyclopedia, whose words hopefully will with time echo far and wide.

3. The author believes in objective work. He does not feel embarrassed to say that he is the ‘son of proof’ nor stating the truth even at his own expense. His opinion is that erudite work, just like any other work, must spring from a mind free of prejudice. It would not be right to set an assumption, and then look for evidence to support it.

4. The author believes in founding. He often repeats his saying: “We have to be convincing, not intruding.” And so he deems the information to be as essential as possible, yet without hindering progress. The establishment must come first, organisation section and individual work third, which would leave no place for failure.

5. He morally believes that the best lies in the middle of things, that is in moderation. In the realm of writing one should not go for neither complication nor for too simplicity, but an adequate amount between the two extremes is the proper requirement in the encyclopedic work.

6. He also thinks that by passing an issue and uncertainty should eschewed, Hence, text of the Encyclopedia have been supported by margins and plenty of commentaries.

7. He thinks that despite competency of style, and fear they may lay a vague idea before the reader, subject-matters should first be concisely introduced to him. Hence, the author’s idea of the initial preface. On the other hand, as the author happens to think that since the reader might not be willing to read through the whole specific material of interest, the former deemed it therefore recommendable for the latter’s benefit to work the concise conclusion as well.

8. The author is keen to facilitate for researchers and seekers of knowledge. Perhaps the greatest difficulty which faced him in obtaining the appropriate pieces of information made him convinced to enlarge the indexes, therefore the reader will be at ease to reach the desired information from any index.

Hence, the idea or working an indexed dictionary, beside an objective index, at long last. Besides, there is the idea of working a prestigious biography-dictionary of those mentioned in the margin, and other dictionaries if things run favourably.

9. The author believes that criticism against those persons in the biographical section or revealing it to them otherwise it is not of scholarly conduct; and so in serving the values of the Cause and abiding by principles of god manners, he is keen to maintain this honour and so to forsake the errors and misdeeds. Yet he is not ashamed to state the truth in approved cultivated work would require that position as well. He would take that up as right, as it would be wrong to deviate from the right. Nevertheless, he appreciate that Almighty God (EBHN) is also the Concealer of faults of His servants; should His servant uncover them? However, in cases that concern someone that is notorious for his habitual slandering other, then his integrity becomes open for accusation for the sole purpose of deriving some facts. On the other hand, the author has undertaken to avoid praising people subject to the biography of the Encyclopedia and also to do without high profile titles and similar forms of address as far as possible. That is because in encyclopedic enterprise one cannot afford to transgress the bounds of objectivity through bidding the dues to everyone according to their own merits.

10. Above all, the author has faith in the Alawite (*) saying: “Act for your life as if you would live forever and for the hereafter as if you would die tomorrow.” His work in this Encyclopedia is run in line with this saying from where he dealt in time and with the pieces of information, amongst other things, in terms of that guideline, otherwise he would have achieved nothing.

11. He also feels that what are so-called discouragements should be either satanic hindrance or they constitute perfect testing. If they are the former, he must block their way, but if they are the latter, then he must be contented with them, and accept their challenge so as to pass the test in the sight of God (EBHN).