Hussaini Centre for Research‎ in London celebrates arrival of

Hussaini Centre for Research‎in London celebrated the arrival of the banner which used to be fluttering over the dome of the Imam Hussein Holy Shrine.

It's been mentioned that it was sent to London in order to raise it over the Husseinyats (Mosques) regarding the month of Moharram, the time of being sorrowed upon the tragedy of Imam Hussein (PBUH).

The head of the museum of the Imam Hussein Holy Shrine Mr. Ala' Ahmed Diya' Ed-Dean met the remarkable Islamic scholar Sheikh Mohammed Sadiq El-Kurbasi, the author of the unique encyclopedia about Imam Hussein (PBUH) and presented to him a creative shield in recognition of his great efforts he has been making since 1987. 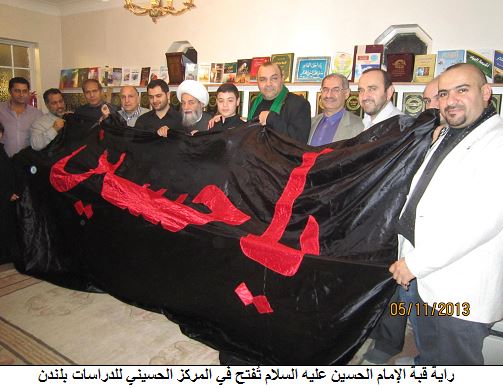